When it was announced that Julie Bindel had been shortlisted for the Stonewall Journalist of the Year award in 2008, the trans-activists went wild. Julie had written an article four years earlier in which they claimed she’d made some transphobic comments. Even though she’d apologised, they demanded Stonewall drop her from the shortlist.

It seemed a chilling assault on freedom of speech. Sure Julie wasn’t perfect. But who is? And she’d worked tirelessly for women for more than a decade and had written many ground-breaking articles that brought a feminist analysis to a mainstream audience.

Stonewall was under wiser leadership then and it held firm. So the trans-activists organised a protest outside the Victoria and Albert museum where the award ceremony was taking place. Finn Mackay, founder of the London Feminist Network (LFN), organised a counter demo. She hand-stitched a huge purple satin banner emblazoned with “Julie Bindel fanclub” in white satin letters. 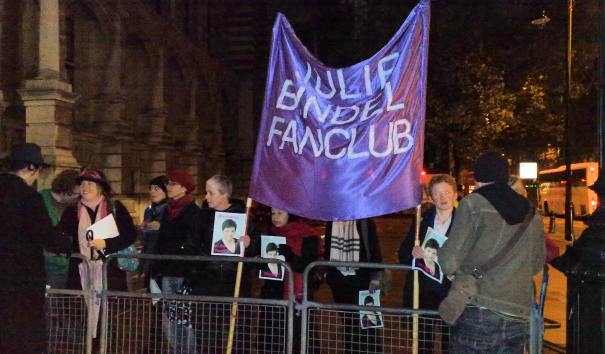 It was a cold November evening and I went to the demo straight from work. The trans-activists were on the left of the steps up to the imposing museum entrance, the fanclub on the right – all behind metal barriers the police had set out earlier. Although there were more of them than us, the numbers were not as unbalanced as we’d feared.

There was shouting but I never felt afraid. Julie arrived and whirled past with her entourage, giving us a royal wave and stopping briefly to thank Finn.

Looking back now, after seeing the physical and verbal assaults that trans-activists have delivered to feminists over the past year, it all seemed good natured, very British, practically middle-aged in its decorum.

Once all the guests were inside, we hovered around, wondering what to do. Should we wait for the ceremony to finish, to show solidarity with Julie when the guests came out? Or should we adjourn to the pub? We were relaxed and there was some mingling of the two groups.

It was nearly 10 years ago now and I can’t remember exactly how I came to be talking to three trans-activists. Very obviously male, they were dressed in a parody of women’s clothes and makeup, and towered over me in huge sequinned high heels. They told me I didn’t understand what it meant to be a woman but they would be happy to instruct me.

I laughed at the absurdity of it and said, “But I am a woman.”

But they were serious. Deadly serious. They insisted I didn’t understand what being a woman meant. They scrunched up their faces at my androgynous haircut and shabby clothes, my lack of makeup. In a flash it became clear to me what they meant. Their image of woman was as worshiper of penis and the male godhead. They had no conception of woman as force, as being, in her own right.

I told them I was a mother, I’d given birth, breast fed. But they had no interest in listening to me, an actual woman, so convinced were they of their own rightness.

I went away feeling deeply disturbed. Their insistence that they were not only women, but a superior kind of woman, was almost too bizarre to take seriously. But they would entertain no dissent. Perhaps it was this that made me feel sick.

I thought of my mother, my grandmothers, of all the women who came before me, who gave me life and love. I thought of how their lives had been constrained and constricted by the system that granted the men in their lives more or less absolute power over them. I thought of their tough struggles to survive, of their determination that their children would have a better life than they did.

I thought of my own life and my defining struggle to crawl out from the Stockholm Syndrome of femininity and to find myself as actor on my own terms, not in relation to any man.

Gradually I came to see the trans-activist movement as part of the backlash to the gains women had made over the previous decades. I saw their goal with startling clarity: to return females to their place in a Stockholm Syndrome relationship with their true masters, men (as whom, in spite of their claims to be women, they clearly identified).

The trans-activist movement is not a progressive movement. At its heart it is regressive. And that is why it appeals to so many with nefarious interests.

To Big Pharma it is a gravy train – as a significant percentage of the population gets trapped into expensive lifelong cross-sex hormone medication. To some less-than scrupulous surgeons, therapists, policy makers and other specialists, there’s the prospect of becoming well-paid experts in a cutting edge field. It suits the neoliberal capitalists intent on siphoning off the world’s resources into their private luxury pockets, that the people are distracted and at each other’s throats. To the porn-soaked leftist men, there’s the delicious anticipation of getting rid of those humourless feminists with their obsession with closing down the sex industry and replacing them with men who purport to be women and who love porn just as much as they do. To certain narcissistic misfits, it’s a way of placing themselves at the centre of the frame and of threatening anyone who disagrees with hate crime. It’s such a neat way of shutting up all women, any woman.

It is not possible to change sex. I do not accept men as women. Feminism is a movement by and for women. For the ultimate benefit of everyone.

So I am a TERF – a radical feminist who thinks that men – actual males, no matter how they identify or present themselves – do not belong in feminism. This is a legitimate ideological and philosophical position.

I wish all people well and I long for the widening of how we can be as men and women. I long for a truly egalitarian world. But we will never achieve that unless we renounce the cult of the masculine and learn to love and honour women too.

9 thoughts on “How I became a TERF”